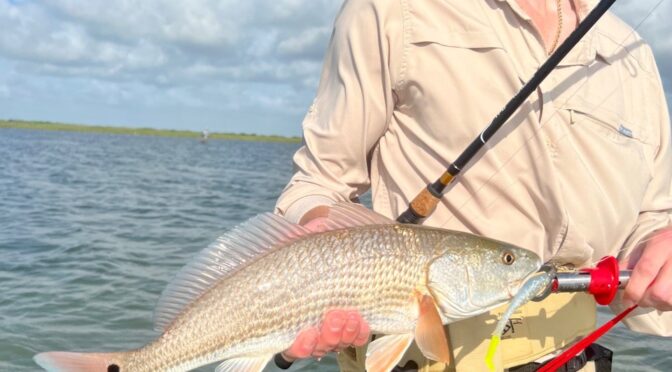 This past week was much of the same action as last week. This is to be expected this time of year as conditions stay relatively the same. Our biggest challenge during these hotter periods is knowing when to be where. Feed periods, tidal movement and bait activity help us key in on bigger fish.

Our bait selection this week with the higher winds was DSL’s victorious secret, chicken of the c, and plum/chart. Early in the mornings before the big winds, we did have some pretty aggressive topwater action. In the San Antonio Bay system, when the wind shifts from ESE to SSE and S, it causes bay waters to shift from the south side over to the north side. When this happens the bay gets stirred up and water goes more sandy brown than green. This color change along with cloudy, partly cloudy, or sunny skies plays a role in our bait selection.

With the future forecast holding much of the same winds next week, I would suspect we will reload the boxes with the same tackle. Although we had some hot air temps already, the better trout have seemed to hold up shallow longer than expected. But, by 11-12pm the bite would tapper off, instead of the hard thumps from earlier in the morning it was just that hung up in grass feeling, with a head shake. It is hard to do, but most successful way to land these types of fish is to just start cranking, catch up to them and get tight.

On a side note, we have been able to enjoy God’s work leaving out in the morning, and witnessing something called a planet parade. Before sunrise in the East sky you can see 4 planets in a line. from right to left it’s Jupiter, Venus, Mars and Saturn. At least that’s what the article I read about it said. Pretty cool getting to see things like this in the pre-dawn hours.

Captain Nathan Beabout has guided fishing trips and duck hunting trips on the Middle Texas ​Coast since 2007. He has fine tuned his fishing and hunting skills, and adapted to all skill levels of customers for a successful trip. Spending many days on the water every year, his knowledge and skills of fishing from San Antonio Bay to Cedar Bayou and Port Mansfield areas, has developed and can lead you to a memorable trip. Call Capt. Nathan at (210) 452-9680