In late 1964, while stationed with the US Army in Schwaebisch Gmuend, Germany, I decided to complete the requirements for getting a German hunting license.  In my job as German American Coordinator for the Armerican troops in Schwaebisch Gmuend, I met many of the German city and county officials in the area.  One of these county officials was the head of the local Forestry office with the title Oberforestmeister.  I told him that I hunted deer in Texas and wanted to find out more about hunting in Germany.  I had brought my 30-30 Savage Model 99 saddle rifle with me to hunt.  He informed me that a 30-30 rifle could not be used to hunt in Germany. He referred me to the Army Rod and Gun Club to get the necessary training and testing for the license. After I got my license, he told me to contact him, and he would take me on my first Rehbock hunt.

I signed up for the hunting class at the local American recreation center, took the test, and received my German hunting license.  The American Hunting office then issued me a U S hunting license.   This license allowed me to kill 6 rehbocks and several other game animals each year.  Checking with the Rod and Gun Club, I was able to checkout a 30-06 rifle.  To familiarize myself with the rifle, I took it to a rifle range and sighted it in. I was now ready to go hunting,

In early 1965, I contacted the Oberforestmeister and told him I had my license and wanted to take him up on a hunt for rehbock.  He agreed to set up an evening hunt for me and would call me when he had it set up.  A few days later, the Oberforestermeister called me that the hunt was set up.  He would be my hunting guide and would pick me up at the American Hunting office at 3 PM the next day.

After a 15-minute ride we arrived at the hunting site. He parked his car at a farm haus, and we walked quietly about 300 meters to the edge of an alfalfa field.  There we quietly climbed into a covered tree stand called a Hochsitz (high seat).  My guide told me that it was most important to remain very quiet because the reh deer have an especially keen sense of hearing and would not come out of the woods if they heard unusual noises and voices.  He talked to me in a whisper to preclude being heard by the animals. He told me that the bock we were hunting for would generally come to the alfalfa field to graze at about one hour before dark.   A mature rehbock stands about 18 inches tall at the shoulder with a live weight of about 30 lbs.  The alfalfa in the field was about 9 inches tall which meant that we should be able to see the buck standing in the alfalfa.

END_OF_DOCUMENT_TOKEN_TO_BE_REPLACED 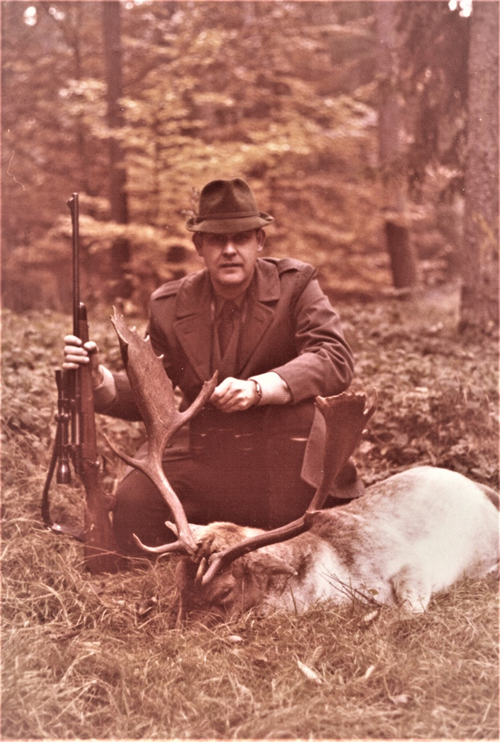 In previous articles about big game hunting in the United States, which were posted on the Texas Outdoors Network website, I discussed my successful hunts for Bull Elk, Rocky Mountain Bighorn Ram and Ewe and Rocky Mountain Goat.  All of these hunts took place in Colorado.

In this article I will discuss my successful hunt for a Fallow Deer (Damhirsch) In Germany.  Since the Fallow Deer hunt took place on November 14, 1978, while I was stationed with the US Army in Germany, I decided to write an article for our American daily newspaper, THE STARS AND STRIPES.  The following is a reprint of the article as published in the April 27, 1979, edition of THE STARS AND STRIPES.

(By LTC Clarence A Scheel of the Office of the Deputy Chief of Staff, Systems and Automation, at Headquarters, USAREUR in Heidelberg.)

HUNTING FOR AND BAGGING A TROPHY DAMHIRSCH (Fallow deer) in November 1978 was the most thrilling hunting experience I have had in more than 30 years of big game hunting.  Although I have successfully hunted antelope and mule deer in Colorado, red deer and roe deer in Germany, and white-tailed deer in Texas, Washington, Oklahoma, Kansas and New York, none of these hunts compared to the excitement I experienced when I saw the big buck with the large palmated antlers drop after a carefully placed shot.

You can probably say that the anticipation for the hunt began last June when I registered with the USAREUR Hunting and Fishing office for the annual lottery drawing for the trophy hunt.  Of the more than 2,000 American military, civilian and dependent hunters in Germany who entered the lottery for mouflon, fallow deer, red deer and chamois trophies, I was one of the five lucky hunters drawn to hunt for the fallow deer.  Since five allocations consisted of two Class I and three Class IIB trophies and since my name was drawn fifth for this species, I was authorized to bag a Class IIB Damhirsch.  A Class I buck must be at least 10 years old and have fully developed “shovels” on both sides.  A Class IIB, although still a desirable trophy, may not have a fully developed shovel on more than one side.  In October, Herr Schuster at the Heidelberg Hunting and Fishing Office booked my hunt for Nov. 14 with the Hassloch Forestry office at Moerfelden, near Rhein Main International Airport.

Before daybreak on the 14th, I met my guide, Forester Antes, at the Hassloch Foresthaus.  After the customary greeting and exchange of pleasantries, he explained that rather than still hunt on a stand, as is normally done for roe and red deer, we would be stalking.  At daybreak, we started walking.  For the next two and one-half hours, we must have walked 8 to 10 kilometers.  During that time, we saw several Class I bucks with massive antlers, numerous Class II and Class III and several females.  Every time we saw a group, the anticipation built up, but in every case, there was no IIB.  Since it was by now mid-morning and deer were beginning to bed down, we decided to walk back to the Foresthaus and plan a different strategy for the next morning.  On the way back, we saw several more, but still no IIB.