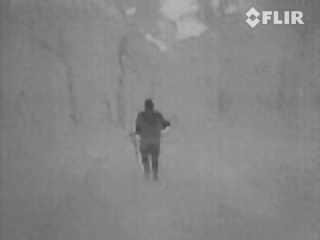 The FLIR Scout TK is the most affordable thermal monocular in the Scout product line.  Thermal vision has become more affordable in recent years and every outdoorsman should carry one.  Thermal is one area where you get what you pay and the FLIR Scout TK, with an MSRP of $599, is a competitor to the Seek Reveal XR and the Leupold LTO.  It can detect a man-sized target at about 100 yards. Someone needing a long-distance camera must step up to the Scout II or Scout III and pay a premium price.

The FLIR Scout TK is simple to use.  The menu system is logical and easy to operate in total darkness.  A built-in camera allows you to capture images and videos to download to your PC.

Texas Outdoors Network tested the FLIR Scout TK in two different settings.  The first was as a general security device around our family ranch.  The second environment was out hunting on our lease.

It is important to understand what you are buying with any night vision device.  The effective range of thermal at this price point is about 100 yards and in.  If you want to spot feral hogs at 400 yards across an open pasture you will have to spend quite a bit more money.  There is a big difference between detecting something out there and positive identification.  The ranch we primarily hog hunt on also runs cattle.  Believe me, at night a black Angus calf and a big hog look very similar and you can’t make a mistake between the two.

Detection – I see something out there but can’t tell what it is.

Recognition – OK, it is a medium size four-legged animal but it could be a calf, a feral hog, a large dog, a deer, I just can’t be sure.

Identification –  Yikes! It is a calf!  Sure glad I didn’t shoot or else I would owe the rancher some money and probably get kicked off the hunting lease.

I was quite pleased with using the FLIR Scout TK as a general security device around our ranch house.  Suspicious noise at the gate? Grab the Scout TK and see what is happening even at midnight.  Most of this type of activity occurs at less than 100 yards and that is within this device’s performance range.  Certainly if there was an armed man coming up the driveway you would see him clearly – and he would have no idea you are there (remember, it is pitch black outside!).

As a navigational tool and for general outdoors use, a handheld thermal comes in very handy.  Finding your way back to camp in the dark?  No problem.  Navigating a boat at night?  Yes.

Other uses would be to find a lost child or pet.  Fido can’t hide from thermal.  Of course, thermal can also be used for many industrial purposes but that is outside the scope of this article.

As to locating feral hogs (a big problem in Texas and coming soon to your neck of the woods) you must understand the specifications of the Scout TK.  You may be able to spot something out there at 100+ yards.  However, you will have to get within about 50 yards to really know it is for sure a hog and not a deer or calf.  However, if you are hunting at night you also have a weapon mounted night vision or thermal scope for taking the shot.  That is where the Scout TK comes in handy.  It fits in your pocket, is very lightweight, and easy to use.  Much better – and safer – than scanning the brush with your heavy rifle.  If you think of the Scout TK as a reasonably priced scouting tool to help find game and to then get closer for positive engagement it works fine (up to its limitations).

While deer hunting, I use the Scout TK to scan the area before dawn. That way I know if there are any deer out there, and where they are, before legal shooting time.  If you can see four objects down the sendero, in the dark, and one of them is much bigger than the others than you assume it is three does and a mature buck.  You are ahead of the game.

I have personally used thermal devices ranging from $500 to $10,000.  Happiness is understanding what you are paying for and having realistic expectations.