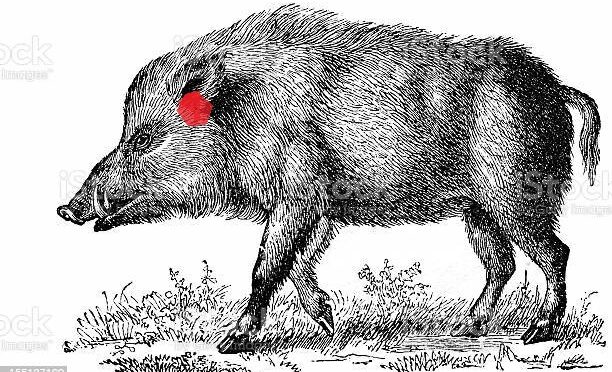 Hunting wild hogs has become a mainstream sport in Texas due to the proliferation and destructive nature of this invasive species. Being a non-game animal, there are very few restrictions on how they may be hunted. They may be pursued year-round by almost any means necessary. So, what makes a good hog hunting rifle?

The answer to that question is dependent upon your intent. If you are a professional intent on eradication you have different needs than the weekend warrior who simply wants to have a good time and harvest some free-range pork along the way. In this article we will discuss hunting pigs for sport, not high-volume eradication.

First of all, despite all the hype and hysteria, most wild hogs are not all that difficult to kill. For decades, deer hunters have harvested plenty of hogs with whatever rifle they took to the stand that morning. I think much of this misinformation comes from people who come across a pig and blast away with 55gr FMJ ammo out of their AR-15. Bad ammo choice along with faulty bullet placement will lead to poor results every time. To be sure, a mean, old, full-grown boar is a formidable beast! However, proper bullet selection and accurate shot placement will drop most wild hogs dead in their tracks. I’ve done it many times. Dead Right There, as we say.

The perfect hog hunting rifle for me is a lightweight, easy to carry, accurate, suppressor-ready, 6.8 SPC short barrel AR-15. Mine is a premium build using the best components I could find:

For optics, I run a Trijicon AccuPoint 1-6 Circle-Cross during the day and a FLIR ThermoSight PTS233 at night – both on QD mounts. My preferred method of hunting pigs usually results in shots of less than 50 yards to I don’t have any problems with accuracy swapping between scopes. The Trijicon AccuPoint 1-6 Circle-Cross allows for super-fast sight acquisition (put the hog’s head in the circle and squeeze the trigger) and excels in low-light conditions.

Ammo is usually the 110gr Nosler AccuBond. Velocity around 2600fps and the AccuBond is a proven bullet design. Other hunters have their own favorites – Barnes TTSX – but I have seen first-hand how hard the 110gr AccuBond puts down a hog (with proper shot placement) so I tend to stick with it.

Many people now hunting hogs started off hunting deer. As such, they may choose the same shot placement as they do on deer – behind the shoulder – and simply gut-shoot the pig. Anatomy is different. Personally, I will almost always aim for slightly below the ear. No doubt, some will disagree but that is a fairly large target area with room for error and any hog hit there is DRT.

We like to get out in the woods and stalk hunt pigs at night. For one thing, it is a whole lot cooler at night during a Texas summer! You can also cover lots of territory with thermal. I have a hand-held Pulsar thermal to scan fields, stock tanks, and trails. It is easy to spot a hog at several hundred yards and then quietly approach them with the wind in your face. That is much more fun and action-packed then sitting in a blind hoping one comes by. At night, it is fairly easy to get within 40 yards if the wind is in your favor and the trail is not too crunchy. A sounder of pigs busting loose at very close range is plenty of thrill!

We will also take hogs when deer hunting. It really amuses me when I read that the 6.5 Creedmoor 143gr ELD-X a) causes a loss of game because they run off after being hit, and b) don’t work at close distances. Here is a big boar that died in its tracks, never even kicked, when poleaxed with a 6.5 Creedmoor 143gr ELD-X at 100 yards! Someone forgot to tell the pig he was supposed to run off. It was as if the Hammer of Thor smote him dead.

If I am setting up a stationary hide on an open field, where I may have longer shots, I will carry my LMT AR-10. The .308 cartridge is superior to the 6.8 at longer distances. However, an AR-10 is no fun at all to run-and-gun with. I would rather be on the move checking out multiple locations rather than sitting still waiting for the game to come to me. However, there are a few known spots with regular activity where the AR-10 makes perfect sense.

If I am targeting hogs, my go-to rifle is the 6.8 SPC. It is light, fast, accurate, and deadly out to 150 yards. The ability to get off multiple shots on a fast-moving sounder is a requirement. The 110gr AccuBond is a fantastic round. Easily swapping between scopes without losing zero is a must. As the above photos illustrate, most any centerfire rifle will work with the right ammunition and shot placement. However, for me, this is my perfect hog-hunting rifle.

The reality of it is that the perfect hog hunting rifle for you is the one that fits your style of hunting, is loaded with a cartridge suitable for the task at hand, and that you execute proper shot placement. They will all get the job done! I do, however, love my custom 6.8 SPC. It is perfect.

One thought on “The perfect hog hunting rifle!”