My middle child, David who is 9 has hunted hard with me this year and got his first deer, a doe earlier in the season. Been trying to get him on the right buck since then.

We have very strict rules on bucks and so it is not just a matterof the first buck you see you shoot.

We were looking for a good cull, 3.5 years or older and 7 points or less.

It came together yesterday evening about 15 minutes after sundown. Some deer came in, a few does, a nice 8 and a 4.5 year old 10. The 10 was a damned nice deer but too young.

We waited until it left and then he waited for the right shot, he wanted to make sure there were no deer behind it and it stopped long enough to take a perfect broadside shot.

He was using my 6.8 running a 200 yard zero.
Deer was 170 yards out and I told him to go for a high shoulder shot.  I was confident in his shooting ability as well as the 95g Barnes TTSX to be able to punch through both shoulders and drop the deer where it stood.

When the time was right he squeezed the trigger and I watched it drop straight down. He executed a perfect shot. He said he saw it drop in the scope which is awesome as he is following through and not flinching.

We were both pumped!

For the gear junkies: 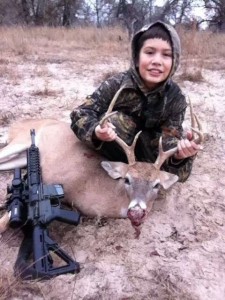 We got it on video

One thought on “David gets his buck!”