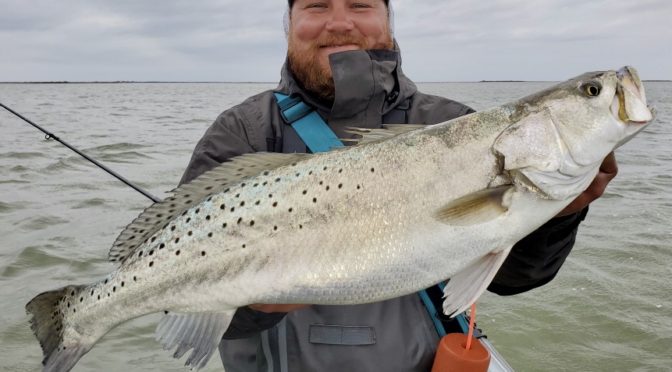 Well………..
Trying to figure out how to describe this groups Mansfield trip.
A good repeat summer client brought down a father/son team, and we were blessed to walk into a good bite. Evan the 13 year old hung in there all day and is a pretty good stick. Both the dad and him set their PB’s on day one, but we had a few days to try and upgrade Evans again.

Day 3 of 4 with this group proved to be the best yet. Day 2 was tough under the high pressure with just a couple solid fish caught. But, day 3, Landon and Aaron upgraded their PB’s.

We had multiple fish over 6#, and walked away from the bite trying to beat in some rain showers.
Today, unfortunately the rain canceled our plans of making a wade over the same ground before the front hit. Hopefully when the winds start backing off tomorrow I can relocate these fish for coming clients. 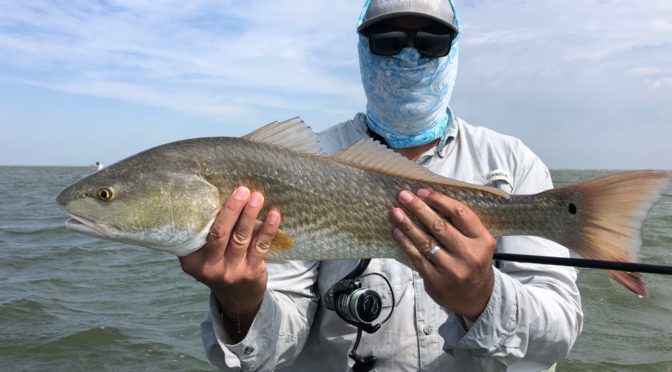 Not a bad way to start the morning! Couple solid trout and a healthy flounder.

Working windward banks throwing DSL’s white ice and strawberry wine. Everything is getting to swim to fight another day.

The redfish started feeding around 10:30, and was best on blue moon and dirty tequila. 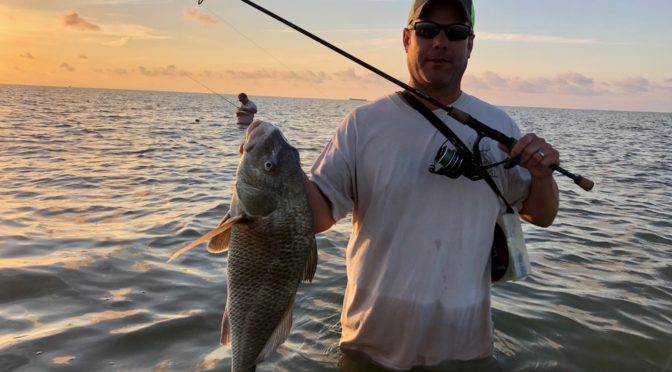 Started before sun up wading for trout with DSL’s chicken of the c, on the oyster shell. The trout weren’t wanting to play nice today.

So as the winds slicked off we decided to go chase pods of reds. The first shoreline we pulled up to had reds in small groups, and singles crawling down the bank. But wouldn’t you know it, they didn’t wanna play either. Making some really good casts on single fish swimming right at us, and nothing. It took a few hours and a couple of moves to finally stick a few fish.

You would have thought with the perfect conditions, the outcome would have had a perfect ending. But, sometimes this is how it goes. We were in the right zip code, and tomorrow is a different day. 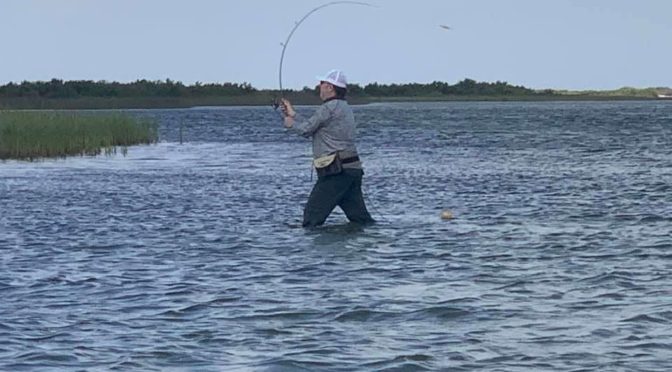 The Waterloo Salinity is my favorite rod for fishing the mid-coast for speckled trout and redfish. It is a great combination of reasonable price and outstanding performance. The Waterloo shop is conveniently located in Victoria and offers a wide selection of rods, reels, and accessories.

I currently run a Salinity 7’0″ spinning rod – Medium/Moderate – with a Shimano Stradic 3000. We primarily fish artificials although we might occasionally throw shrimp or croaker (although, I really hate messing around with bait!). The Salinity has the power and control to cast top-waters, spoons, and soft-plastics in all conditions. Walking a Spook Junior or bouncing a DSL, the Salinity gets the job done.

My 7’0″ Salinity casting rod is fitted with a Lews. This is my first Lews and I’m still getting used to it so a full report on this rod will have to wait. However, given the number of days I have fished the spinning version, I’m confident the casting Salinity will do just fine.

The cork split grip handle has become my favorite style. I have these split handles on a number of rods, including other makes.

In the picture below, we were wading the outside of Contee when I spotted a tailing red up in a grass pocket against the shore. Given the prevailing SE wind and distance to target, I had to put everything I had into the cast. The bone/silver Spook, Jr landed within a bucket of my aim, and, the red exploded on it! It wasn’t until later that night did I learn that my brother had captured the cast. 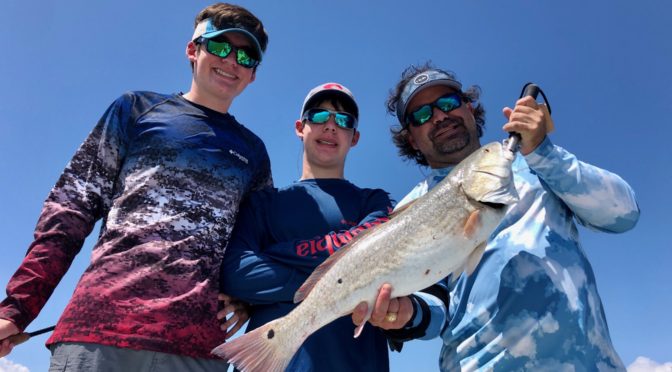 A fun 2 days with these repeat clients. Always good to get the youngsters on the water.

Day 2 we made a couple wades and came up with a few trout, spooked a smalll school of reds, and lost a 6-7# trout. We were all a little frustrated, so we decided with the calming winds to go sight cast some reds and let these boys feel some big pulls. Reds and drum wanted the candy apple. It was a very eventful afternoon! 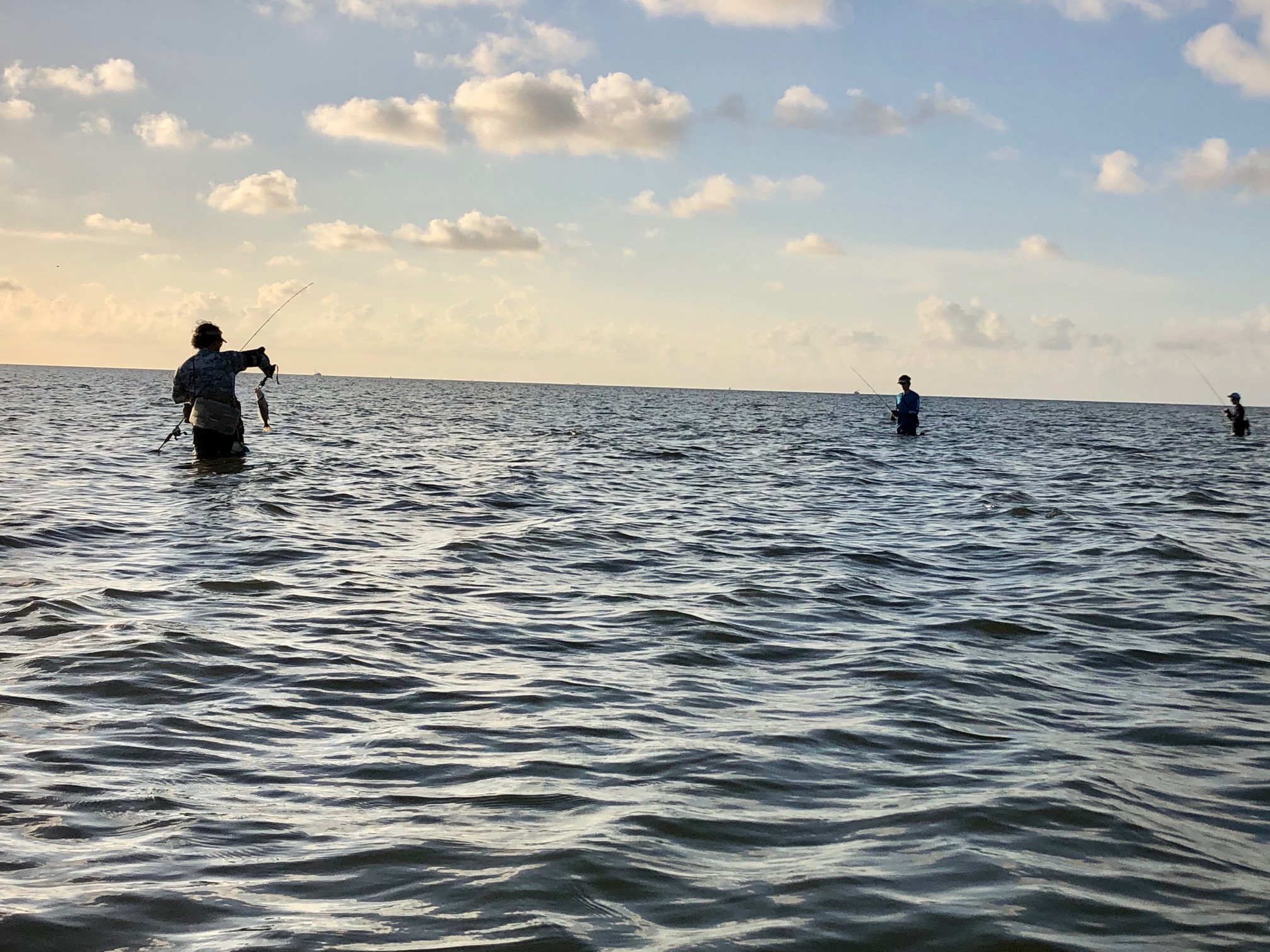 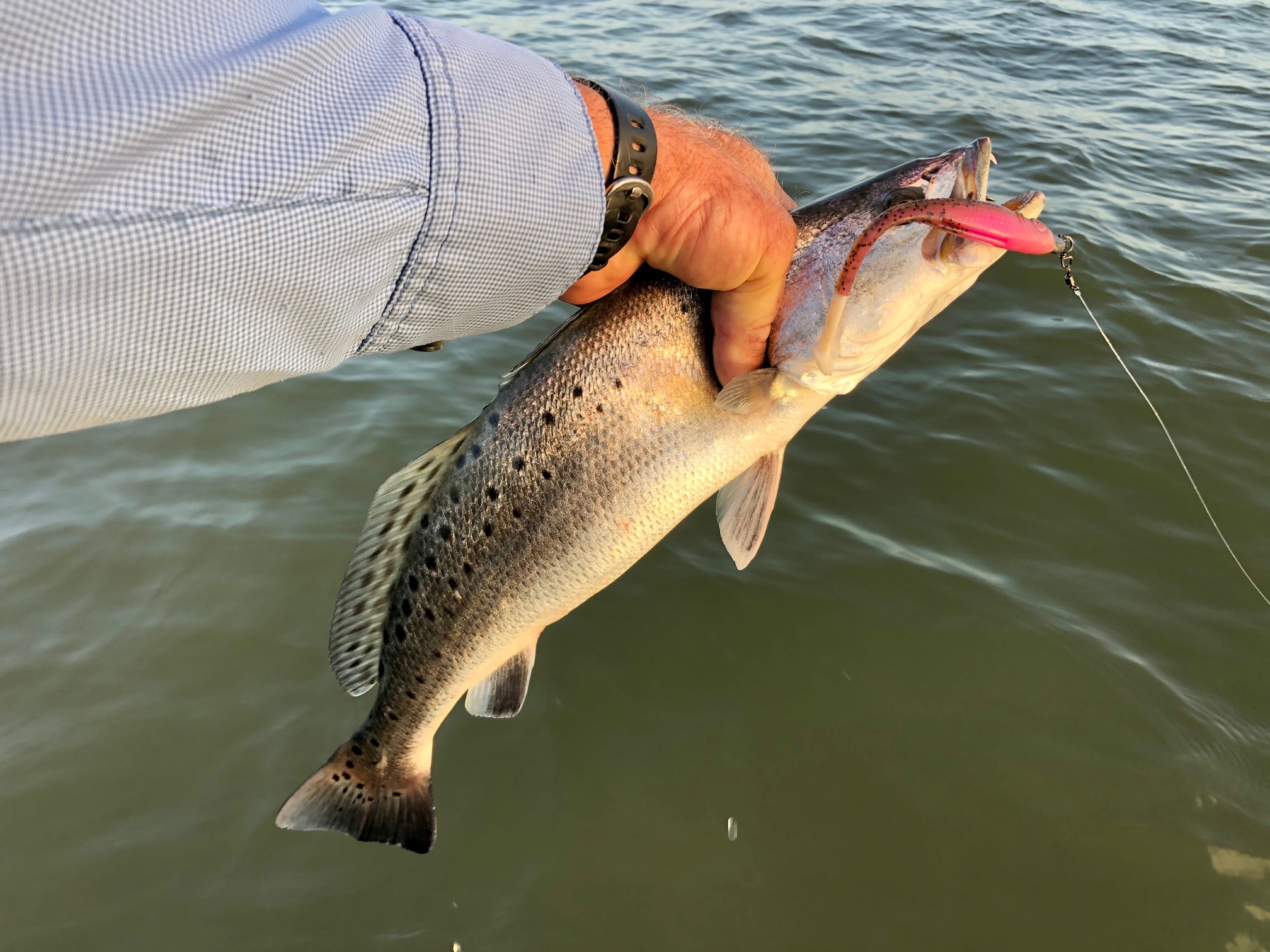 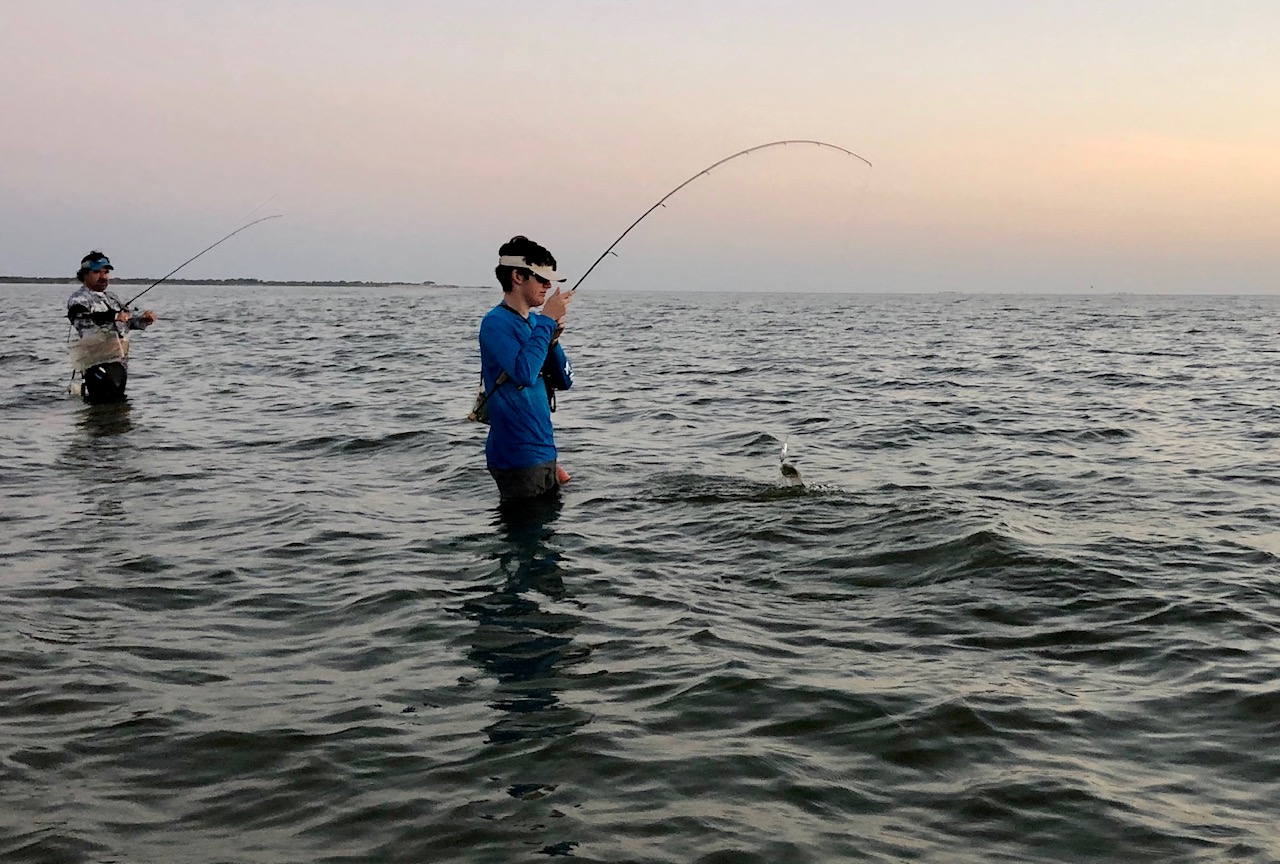 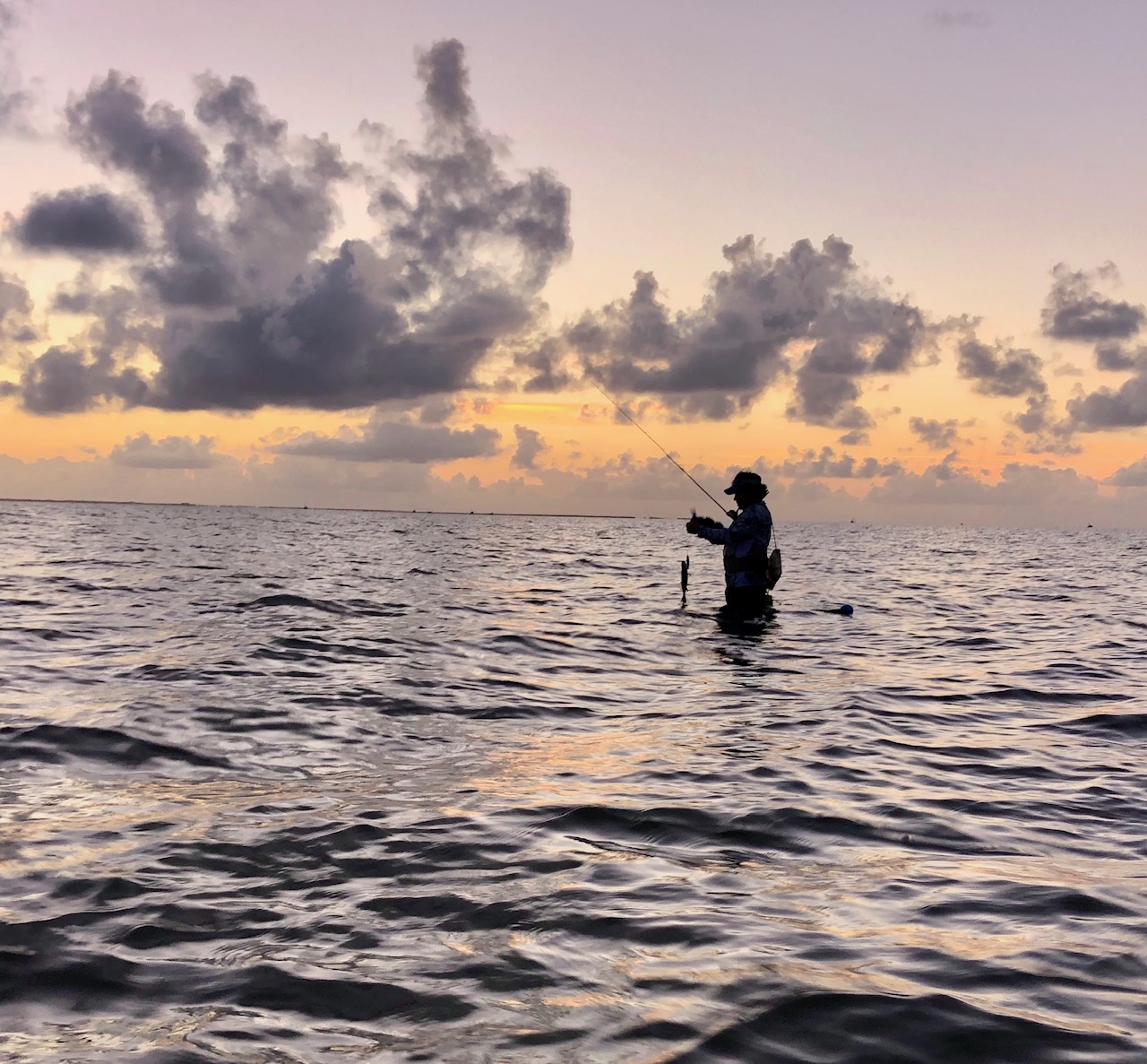 Give us a call for June-August availability. 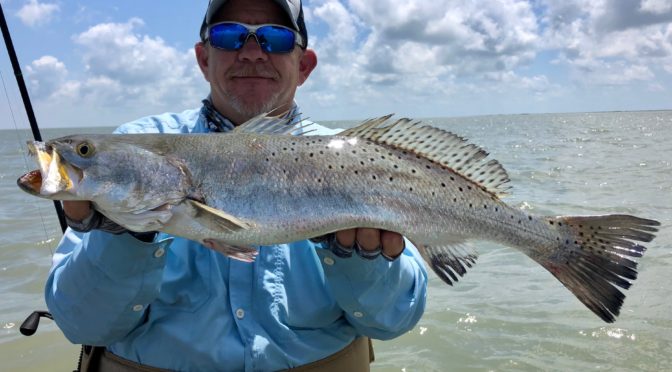 This group stayed with it for a two day trip and it paid off.

Day 1 unfortunately we were met with gusty northeast winds and rain showers which eventually mid day forced us off the water. 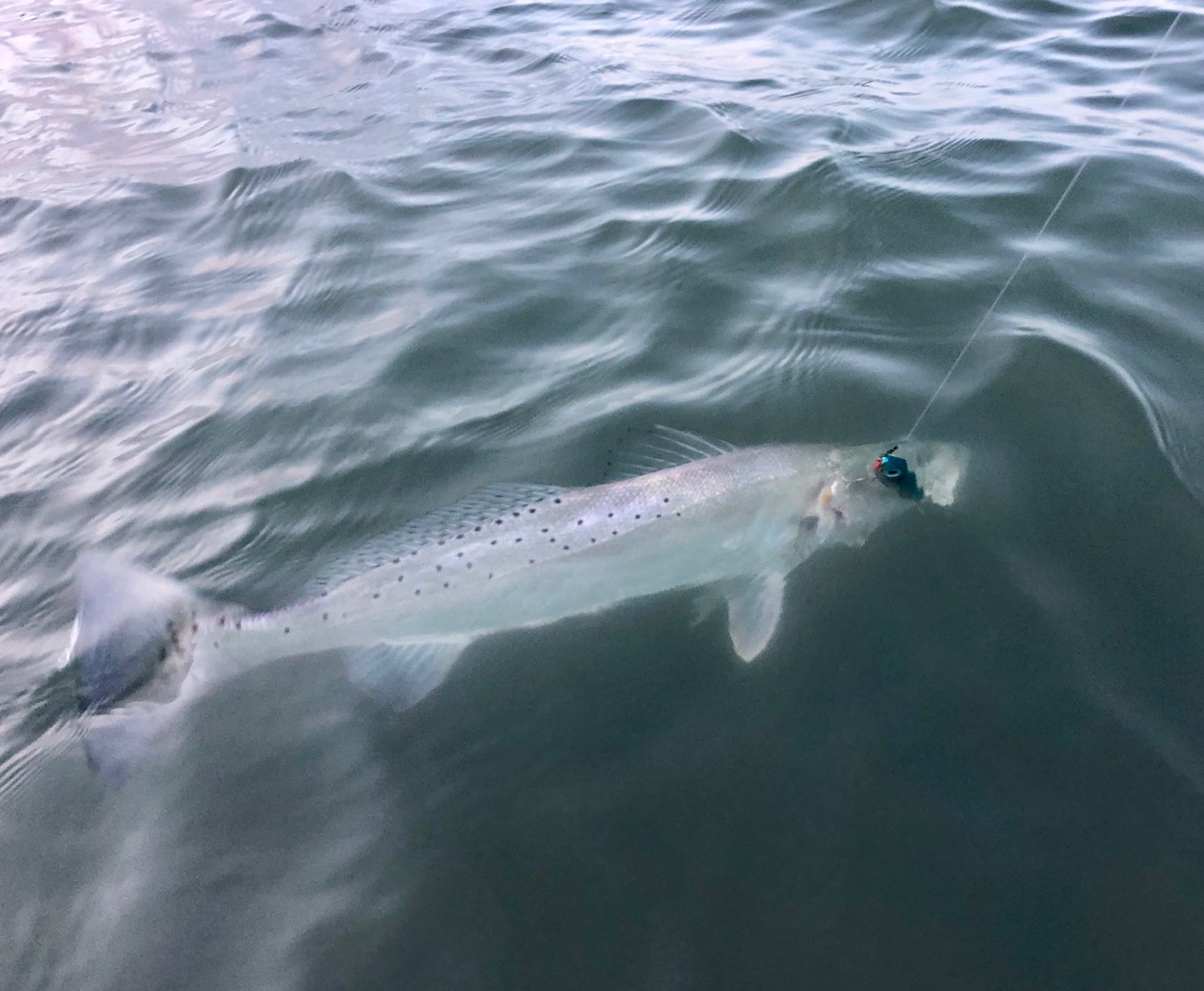 Day 2 however we were met with partly cloudy skies and light east winds. This made for some fun early morning topwater action on the SA bay oyster shell. Around 9am the bite tappered off, and we decided to relocate in time for the major feed period. Finding some sandy green water over a series of shell pads we hoped out of the boat armed with Down South Lures Victorious Secret and bone/silver topwaters. Landing a few reds at first we slowed down and dug in. Shortly after you could hear the excitement as the clients POC custom rod was doubled over. It was his personal best trout caught in the middle of the day working crotch deep shell pads.

I anticipate more of the same action the rest of this week with what our forecast shows, though towards weeks end we might have to dodge a few more rain showers. 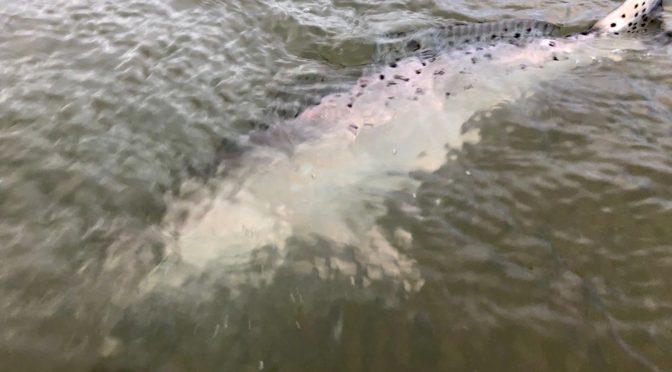 The last couple of days have started off strong with good bites from 6-9:30am. Then after that it fizzles to a one per wade kind of day.

The moon showed good feeds early then again late afternoon, just hard to believe it falls off that hard mid day. But, we’ll take what we can get and enjoy the rest.

Our best bites have come on DSL’s candy apple, watermelon, and natural. Did manage to catch one good trout on a plum nasty Double D that slipped out of my hands as I was trying to snap a pic. 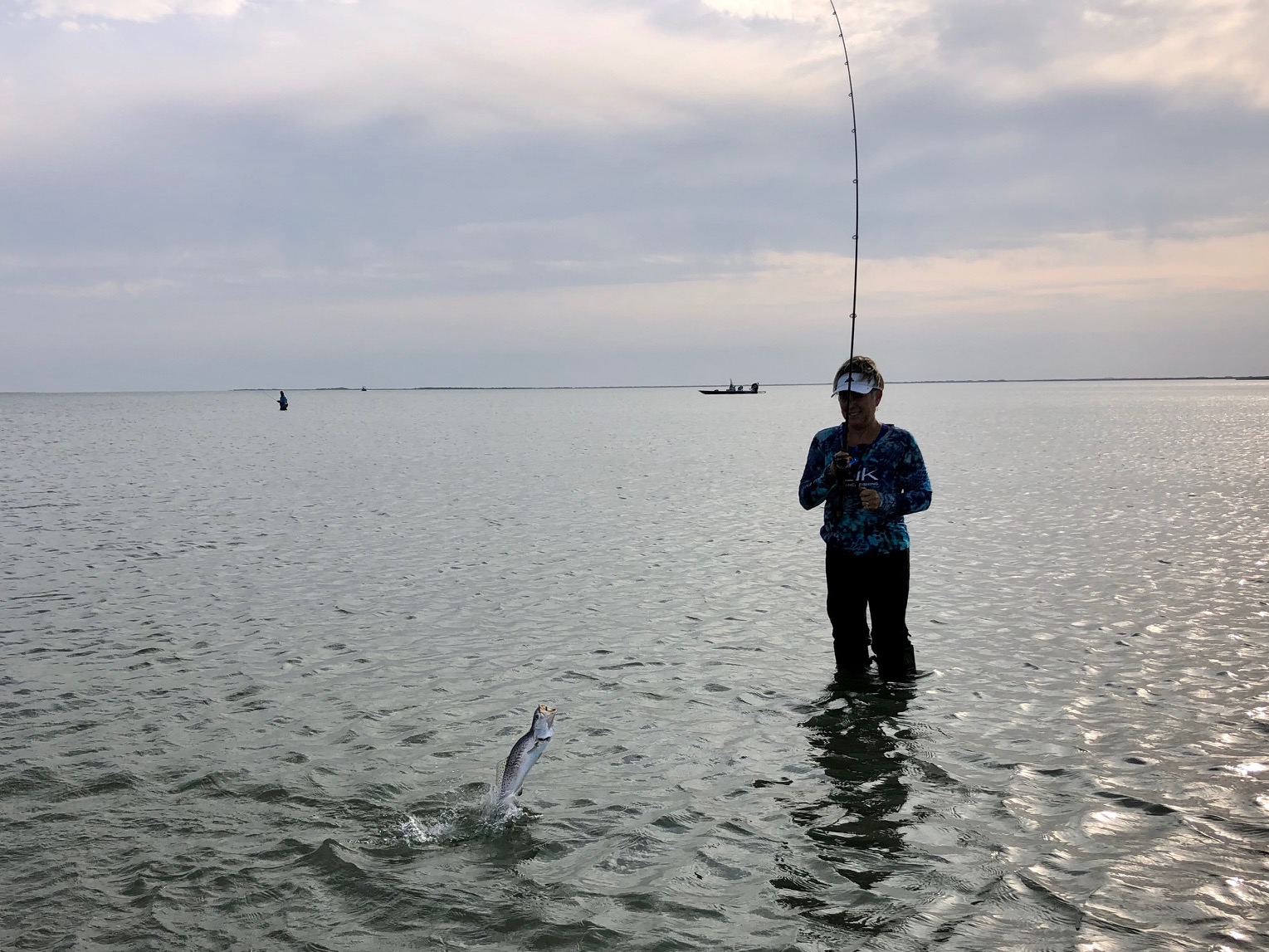 Like the bait, fish have been holding up in knee to thigh deep water over shell, and also sand/grass.

Give us a shout for availability in June-August. Whether it’s wading or sight casting, we got you fishing adventure covered! 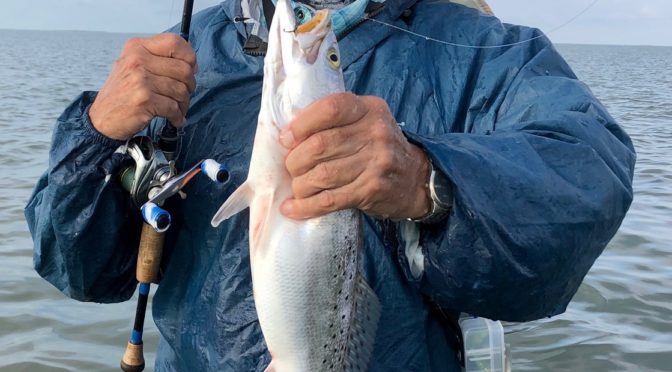 Knowing that the winds were going to rip mid morning, we made a plan to leave the dock around 5:30 and hopefully get in a few hours of calmer conditions. And wouldn’t you know it, our plan came together. Finding rafts of finger mullet and some nervous ballyhoo on an oyster reef we decided to give it a try armed with blue/chrome spook jrs. and bone she dogs we began to blanket the reef. 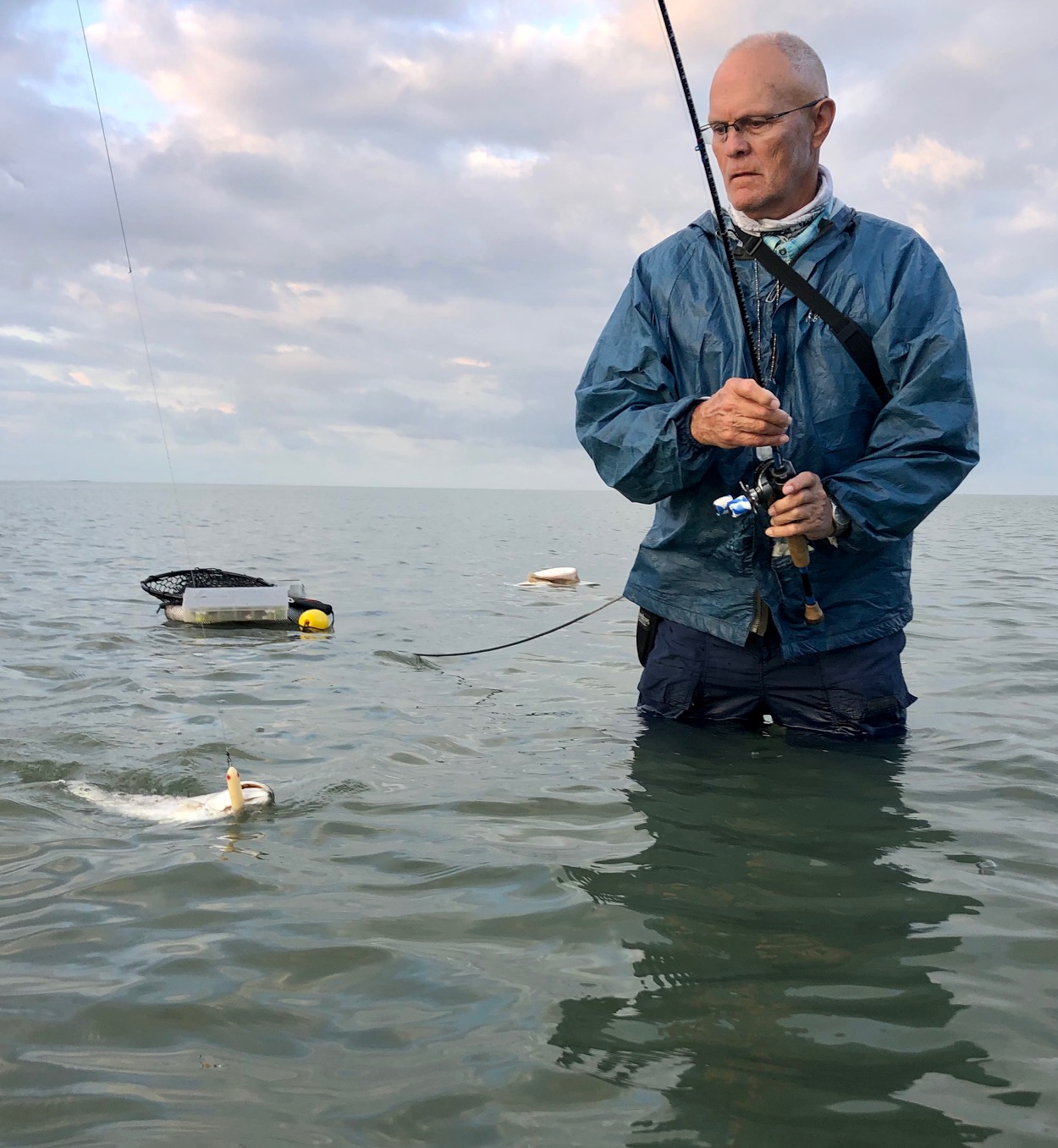 Not 30 yards into the wade we were hooked up with a couple nice 20-22″ trout. For the next 2 hours I don’t think we moved more than 50 yards and were blessed with trout after trout from 18-23″. These fish were crushing our topwaters like it was their last meal. With the cool morning, these fish were knee deep to thigh deep on the reef. We did try a variety of lures, from soft plastics to Double D’s. We caught a few fish on these baits, but the hits didn’t seem to be as hard as the topwaters suggested. More of a tick or that hung up feeling with a slight head shake, so we decided to tie the topwaters back on and have some fun. 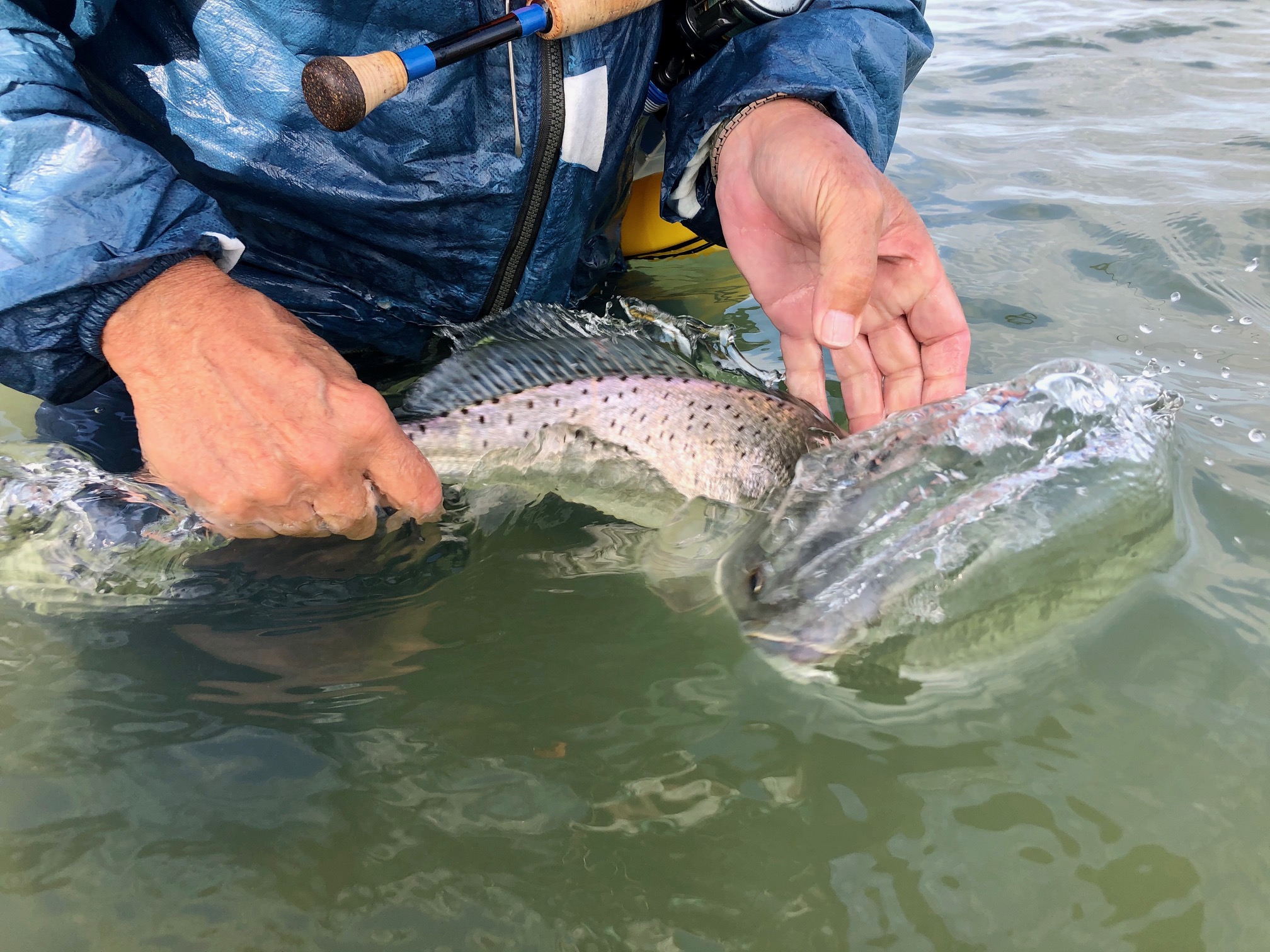 It’s funny how particular they can seem to be some days, but I guess if it ain’t broke don’t try to fix it. Our bite tappered off around 10am when the wind starting to pick up and the water quickly started turning to mud.

Since it was just one client, who at the age of 74 can hang in there with the best of them, we decided to make a few trolls down some leeward shorelines for some redfish. He took me to school on the redfish, catching 5 and loosing 2 before I got bit. After a couple trolls we decided to call it a day as we knew the winds were only going to get worse. Such an enjoyable time with a great friend! All our trout 20″ or better were released to fight another day. 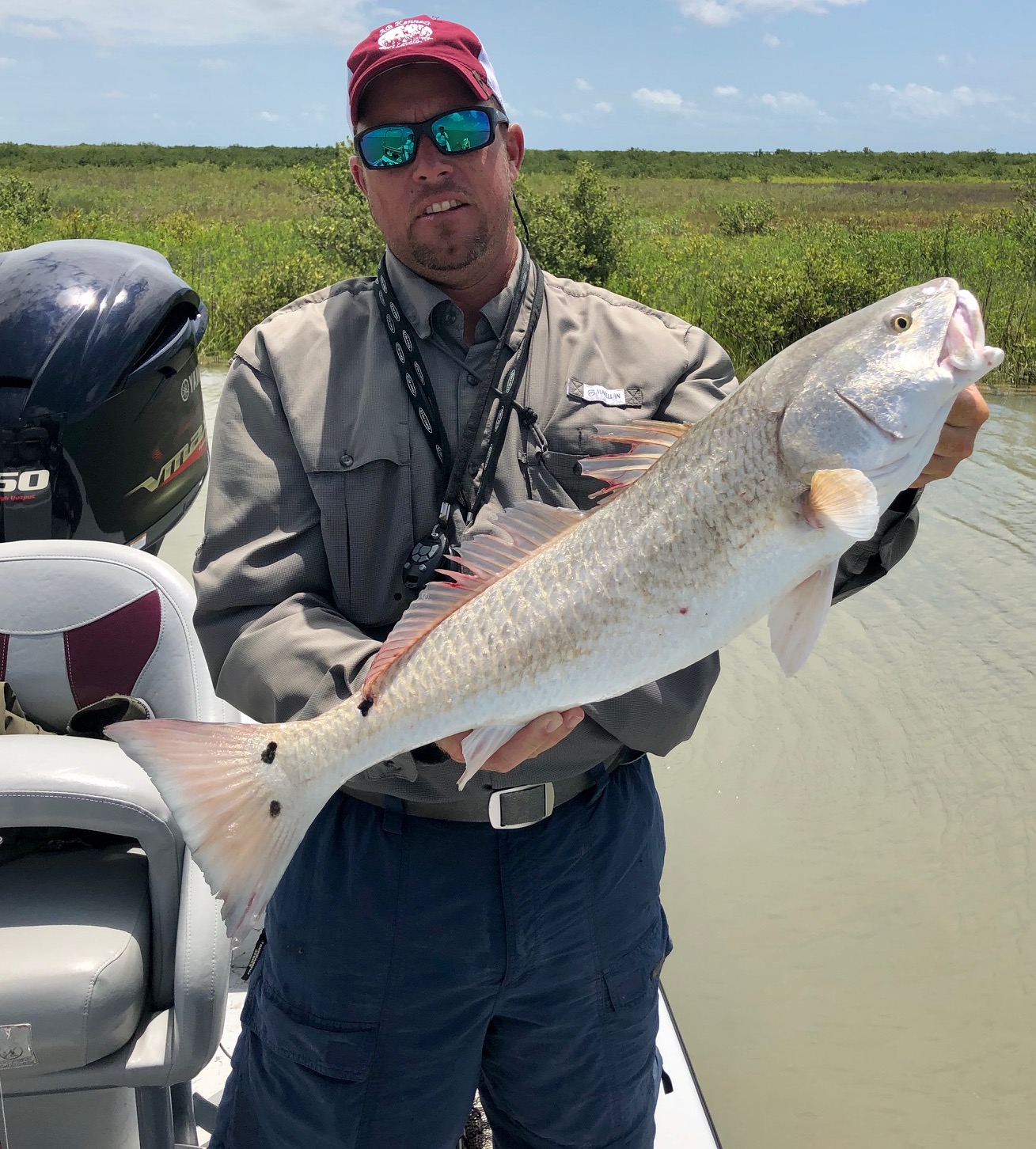 Give us a call or send us a text to get in on the action. We have plenty of availability with all that is going on in the country for May-July. Hope to see y’all soon. 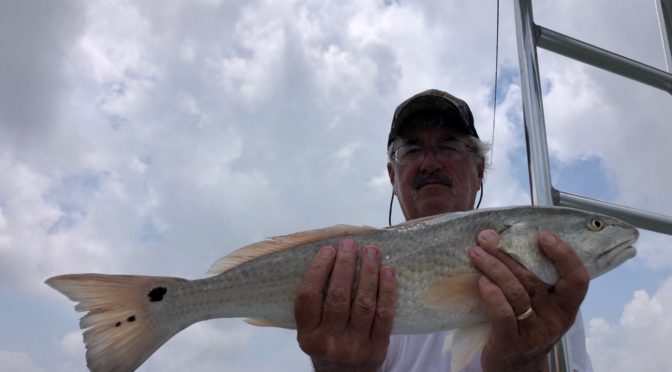 We were blessed to have some of the same fish from yesterday show up again today.

The cloud cover made it a little hard until mid morning, but with cleaner water and lower winds, the reds couldn’t resist the ‘ol DSL red/white and a black spoon. 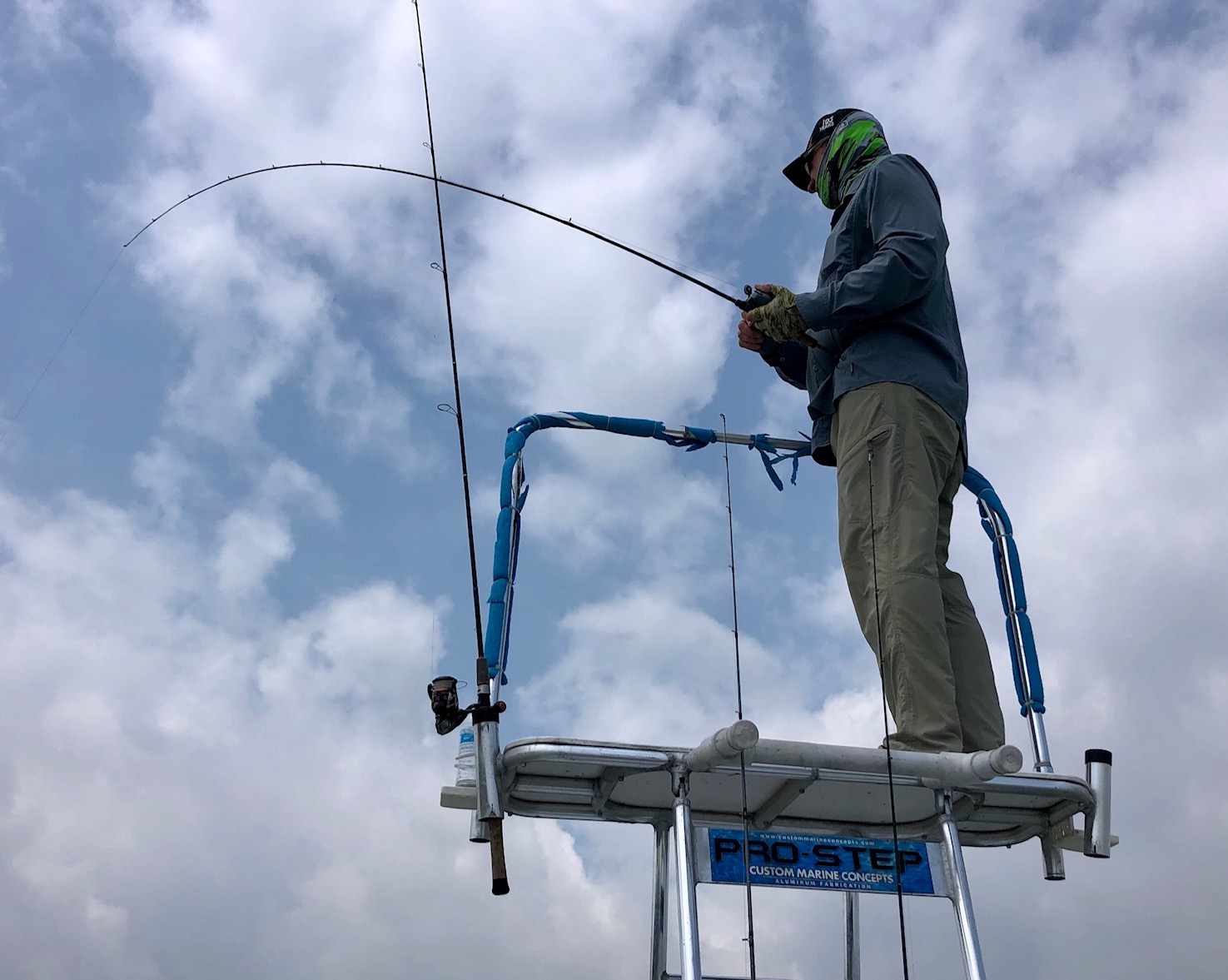 Most of the fish were holding in 2-4 foot of water, and would rush into the bank to crush grass shrimp and crabs. Your reaction time had to be quick today or they would fall back deep out of sight.

Give is a call for availability for May-July, whether it’s sight casting or wading. Let’s go fishin’! 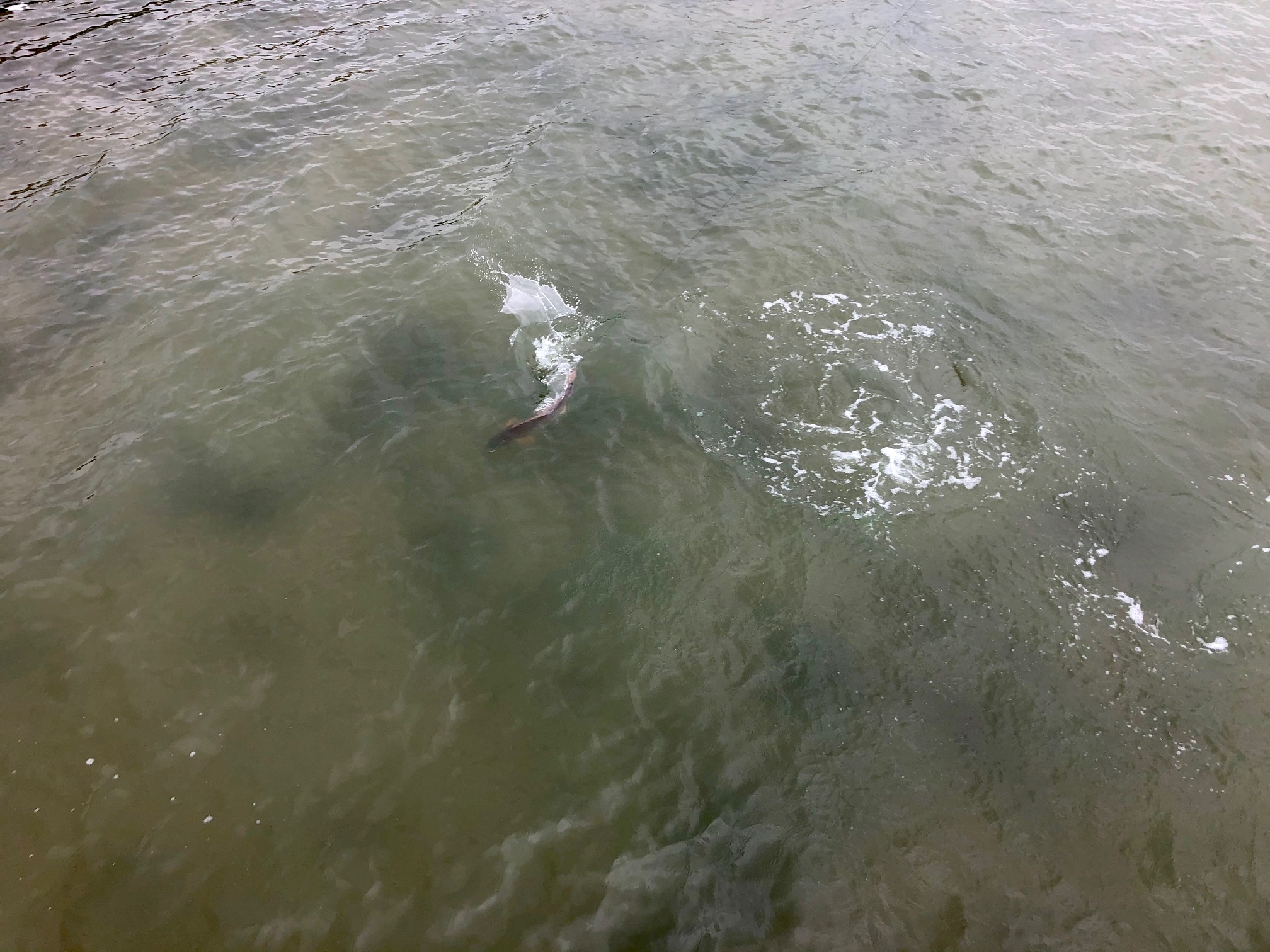 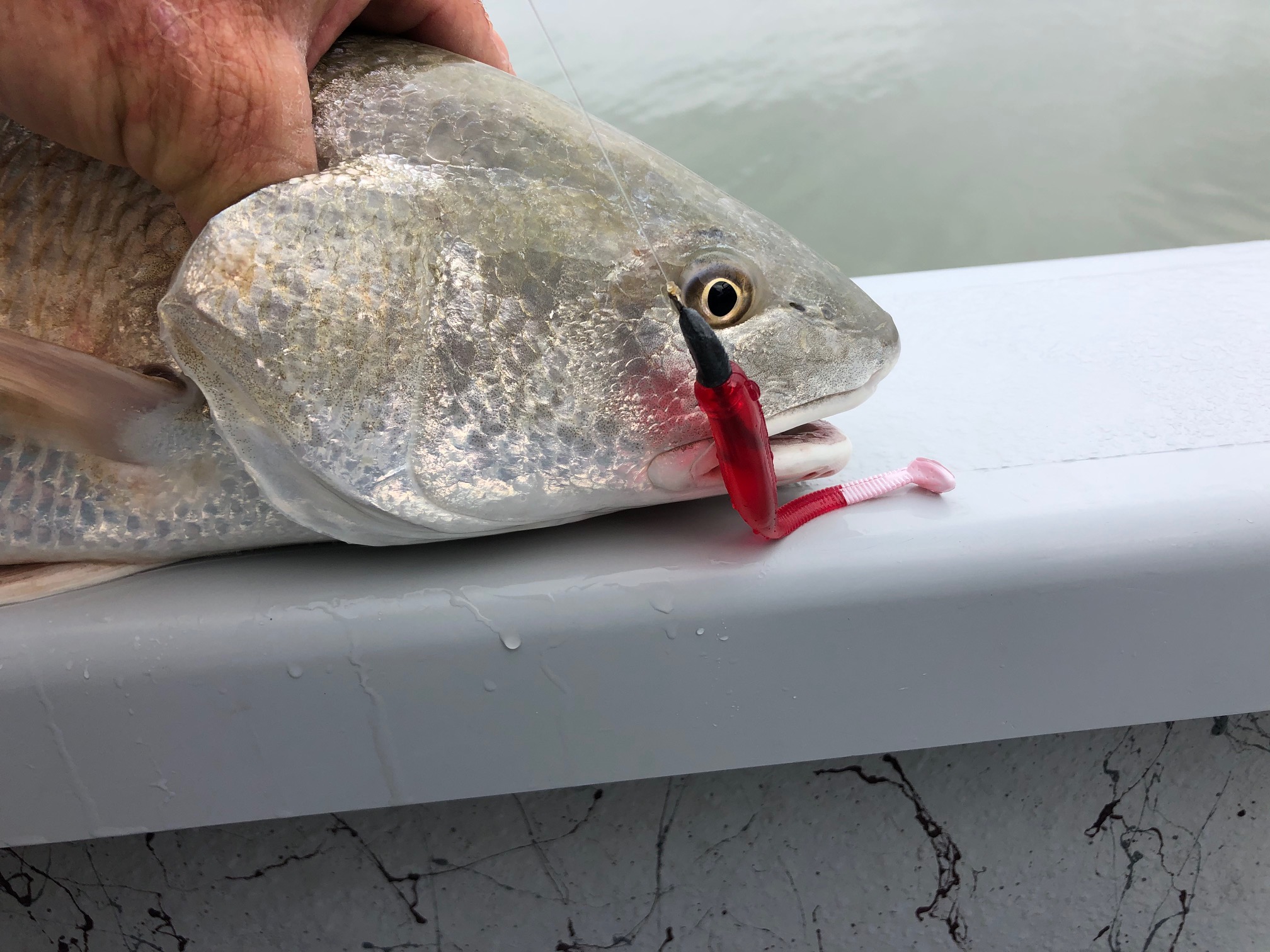 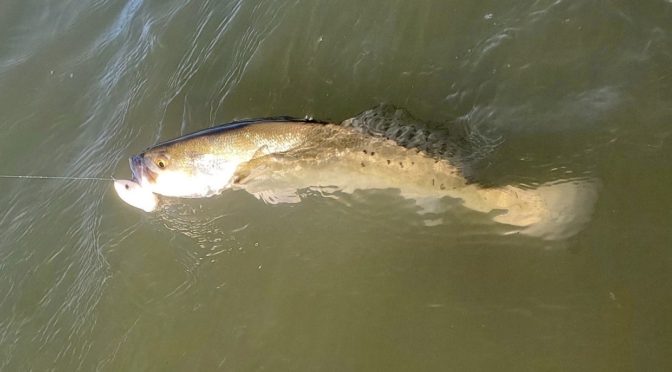 Well when you try new areas and old areas you haven’t hit in a year, sometimes it’s a grind.

A good friend and I went out today for a little scouting/fun fish. We were in search of a big trout or two, but ended up with a handful of solid trout and a red.

A couple areas will be revisited because of the mass quantities of baitfish. Today’s conditions might not have shown the full potential of these areas.

The fish we did catch were crushing topwaters and Double D’s, and were all released for another day.

Plenty of open dates for May/June. Give us a call for your next wading or sight casting trip! 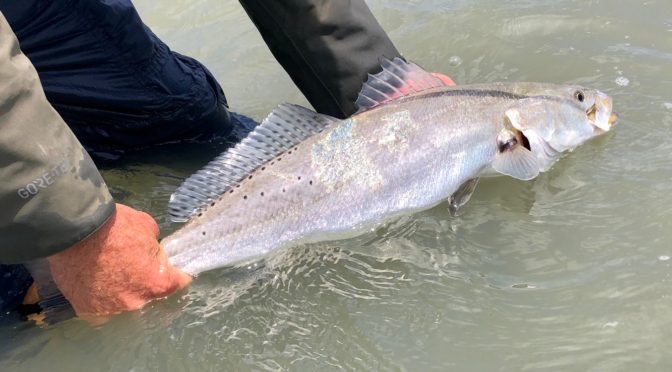 Blessed to have customers that can still come down. These boys had a ball today catching solid trout and talking trash.

Our two go to baits today where DSL’s chicken of the c, kickin’ chicken, and bone/silver one knocker topwaters. The bite did tapper off once the wind started cranking.

I was fortunate enough to end the day releasing 5 trout from 4-6#. My POC custom rod, and 40# FINS windtamer braid got a work out. It never grts old, just wished one of my guys could have been the lucky one!

Give us a shout for May/June availability. 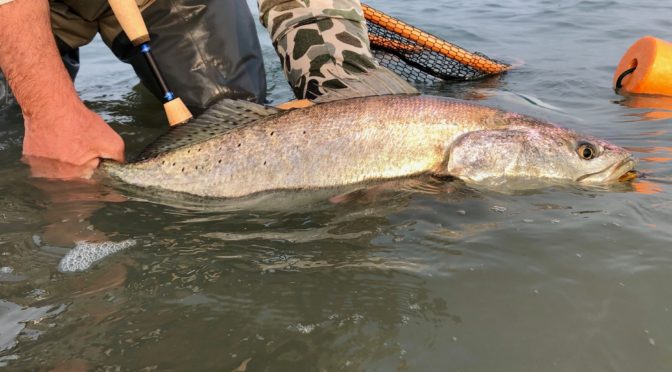 Good day on the water with great repeat customers in Seadrift, TX.

We found a solid trout bite over knee to thigh deep oyster shell. Throwing a variety of baits from DSL’s plum/chart, chicken of the c, as well as Softdine XL’s black/green and chartreuse/silver.

All our trout 21” and better were released to fight another day.